A lesson through experience, TKO! 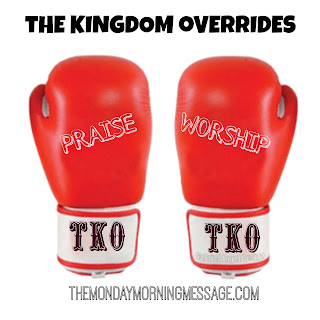 We know that the evil one is nervous, pitiful, a nasty, no good, sore looser. Yes, he already lost! His end is ironclad, there is no escape for him. To add insult to injury, he wants to destroy and corrupt as much of Gods creation as he can. Just like a spoiled rotten scoundrel.

He is so powerless, in so many regards. Scripture itself tells us that we have the Lords power & authority to overcome the enemies deception and grasp. I know I am not the only one who has either faced attacks on every level, from physical, to financial, to familial.

One thing that comes to my mind is a particular day, a while back. I was on my way to take care of some business. I had about a 20 -30 minute car ride ahead, as the area I’d be traveling through is thick with in town traffic. I decided that on my way there, I would begin praising God for everything in my life. Every car, person, road sign, tree, scene in the sky, cloud, song, every faculty I possessed, every thing I could think of and spot, acknowledge and list. It went on and on and on, I laughed a few times, I even had a few overlapping thoughts as I listed thing after thing, thinking wow, God supports and supplies everything, how amazing that we just do not realize everything is a blessing. This exercise was so invigorating! Even though I spoke aloud for almost 35 minutes straight, I felt great, a little thirsty BUT I mean GREAT, GREAT GREAT; like I had just received an oxygen boosted cocktail.

Later on, on my way to leave the area. Something bad happened. It was a setback but I can see in the spirit that what I did before I got there helped to mitigate the damage. It could have been, should have been, so much worse. You see the enemy wants us so focused on whats wrong, that we ignore our power, forget about our blessings, overlook our opportunities. We have the power to knock him out, to thwart him, to put him back in his powerless place. Do not give him a foot hold the scripture says and its so true. Even the bad thing, we can yank our foot out of his mouth by simply praising God for the victory that He will give us over it.

Imagine you have a weapon, and you are going to load that weapon with ammunition. The ammo is praise and worship. Imagine a force field, it is powered and activated through gratitude and thanksgiving.

TKO stand for Total Knock Out, but remeber this for your day to day struggles
The King Overrides (TKO)

Matthew 4:10-11
10 Then Jesus said to him, “Be gone, Satan! For it is written,
“‘You shall worship the Lord your God
and him only shall you serve.’”
11 Then the devil left him, and behold, angels came and were ministering to him.

1 Corinthians 1:18 For the word of the cross is foolishness to those who are perishing,
but to us who are being saved it is the power of God.”

Romans 1:16 I am not ashamed of the gospel, for it is the power of God for salvation…

James 4:7  Submit yourselves therefore to God. Resist the devil, and he will flee from you.

PRAISE AS A SPIRITUAL WEAPON

2 Chron. 20:1
It happened after this that the people of Moab with the people of Ammon, and others with them besides the Ammonites, came to battle against Jehoshaphat.

2 Chron. 20:15 And he said, “Listen, all you of Judah and you inhabitants of Jerusalem, and you, King Jehoshaphat! Thus says the Lord to you: ’Do not be afraid nor dismayed because of this great multitude, for the battle is not yours, but God’s.

2 Chron. 20:17 You will not need to fight in this battle. Position yourselves, stand still and see the salvation of the Lord, who is with you, O Judah and Jerusalem!’ Do not fear or be dismayed; tomorrow go out against them, for the Lord is with you.”

2 Chron. 20:21-25 And when he had consulted with the people, he appointed those who should sing to the Lord, and who should praise the beauty of holiness, as they went out before the army and were saying:

“Praise the Lord, For His mercy endures forever.”

[22] Now when they began to sing and to praise, the Lord set ambushes against the people of Ammon, Moab, and Mount Seir, who had come against Judah; and they were defeated. [23] For the people of Ammon and Moab stood up against the inhabitants of Mount Seir to utterly kill and destroy them. And when they had made an end of the inhabitants of Seir, they helped to destroy one another. [24] So when Judah came to a place overlooking the wilderness, they looked toward the multitude; and there were their dead bodies, fallen on the earth. No one had escaped. [25] When Jehoshaphat and his people came to take away their spoil, they found among them an abundance of valuables on the dead bodies, and precious jewelry, which they stripped off for themselves, more than they could carry away; and they were three days gathering the spoil because there was so much.

Spiritual Implication:
Praise lifts your eyes from the battle to the victory, for Christ is already (excerpt from http://www.sermoncentral.com/sermons/how-praise-can-be-a-weapon-in-spiritual-warfare-timothy-lee-sermon-on-worship-benefits-71161.asp )