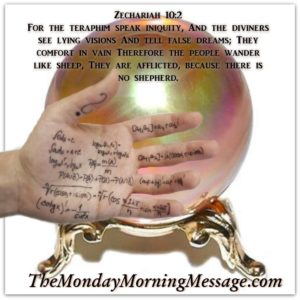 There is a very influential and demonic force that preys upon people in their pain and ignorance.
Everyone is touched by some sort of untimely goodbye, of a family member or friend. Many people have struggled with the same personal issues for years and years, seeking some answer or understanding. Many people seek an advantage over life and think that they can consult these see’rs as a means to gain that pre-emptive information. These people are the ones in pain, the ones who suffer from ignorance because they are unaware of several factors. The enemy loves to take advantage of this vulnerability in particular.

The enemy loves to mix truth with wickedness, hoping that we will be so mesmerized by the decoy that we won’t discover the element of fowl play. How does this relate to this topic?! Because people who believe they are receiving  messages” and “information” from the beyond, are usually not incorrect. The source of their information is not good, and it is not of God, Life isn’t meant to be lived this way, otherwise, we would have been born with a database drive full of videos, explaining to us everything relavent that happened before we arrived and everything relevant to us after the fact. They very well may be receiving thoughts, images, impulses and information BUT it isn’t from those departed individuals. It’s from the Prince of the air, satan himself.

If someone planted a hidden camera in your house and was later able to describe and give accountings of your activities, would you trust them, pay them, and seek their advice?! No, you would want to punch them in the face, report them and have them permanently removed from your life! A psychic, medium or any other name they call themselves by, are no different. They are receivers of information that was gained by no good means. Remember this one thing, the devil knows the truth, he just seeks to distort it, he knows scripture and he knows that if he can get you believe, to put your trust and faith in this method, he is in effect dragging you into damnation and violation of Gods law!

Fact is, there are many good people who believe these abilities they have are good or that they can offer a redeeming qualification because they will use them to benefit others. Nothing more false could ever be conceived. Its not a gift it’s a curse of epic proportions. To participate in this activity, on either side, is wrong and goes against Gods orders. It’s one of the most vile sins that one can pursue.

If you are seeking closure on a past relationship or problem ask God to show You the truth, so that you will know. After all, that is what you are seeking, Peace & truth and love. Connections with all those things that meant & mean so much to you!

If you are involved in this, in any way, shape or form. You must stop immediately! You have to repent, ask God for His forgiveness and break the curses off your life. This includes, horoscopes, psychics, tarot, mediums, clairvoyants, spiritists, seances.oija boards, stones, amulets, potions, witchcraft, anything like that.

Leviticus 19:26-31
‘You shall not eat anything with the blood, nor practice divination or soothsaying. ‘You shall not round off the side-growth of your heads nor harm the edges of your beard. ‘You shall not make any cuts in your body for the dead nor make any tattoo marks on yourselves: I am the LORD. read more.
Leviticus 20:6
‘As for the person who turns to mediums and to spiritists, to play the harlot after them, I will also set My face against that person and will cut him off from among his people.
Numbers 22:7
So the elders of Moab and the elders of Midian departed with the fees for divination in their hand; and they came to Balaam and repeated Balak’s words to him.
Numbers 23:23
“For there is no omen against Jacob, Nor is there any divination against Israel; At the proper time it shall be said to Jacob And to Israel, what God has done!
Isaiah 47:13“You are wearied with your many counsels; Let now the astrologers, Those who prophesy by the stars, Those who predict by the new moons, Stand up and save you from what will come upon you.

2 Kings 17:17
Then they made their sons and their daughters pass through the fire, and practiced divination and enchantments, and sold themselves to do evil in the sight of the LORD, provoking Him.

Isaiah 8:19
When they say to you, “Consult the mediums and the spiritists who whisper and mutter,” should not a people consult their God? Should they consult the dead on behalf of the living?
Isaiah 19:3
“Then the spirit of the Egyptians will be demoralized within them; And I will confound their strategy, So that they will resort to idols and ghosts of the dead And to mediums and spiritists.
Isaiah 19:11-12
The princes of Zoan are mere fools; The advice of Pharaoh’s wisest advisers has become stupid How can you men say to Pharaoh, “I am a son of the wise, a son of ancient kings”? Well then, where are your wise men? Please let them tell you, And let them understand what the LORD of hosts Has purposed against Egypt.
Jeremiah 10:2
Thus says the LORD, “Do not learn the way of the nations, And do not be terrified by the signs of the heavens Although the nations are terrified by them;
Jeremiah 14:14
Then the LORD said to me, “The prophets are prophesying falsehood in My name I have neither sent them nor commanded them nor spoken to them; they are prophesying to you a false vision, divination, futility and the deception of their own minds.
Jeremiah 27:9
“But as for you, do not listen to your prophets, your diviners, your dreamers, your soothsayers or your sorcerers who speak to you, saying, ‘You will not serve the king of Babylon.’
Ezekiel 12:24
“For there will no longer be any false vision or flattering divination within the house of Israel.
Ezekiel 21:21-23
“For the king of Babylon stands at the parting of the way, at the head of the two ways, to use divination; he shakes the arrows, he consults the household idols, he looks at the liver. “Into his right hand came the divination, ‘Jerusalem,’ to set battering rams, to open the mouth for slaughter, to lift up the voice with a battle cry, to set battering rams against the gates, to cast up ramps, to build a siege wall. “And it will be to them like a false divination in their eyes; they have sworn solemn oaths But he brings iniquity to remembrance, that they may be seized.
Ezekiel 22:28
“Her prophets have smeared whitewash for them, seeing false visions and divining lies for them, saying, ‘Thus says the Lord GOD,’ when the LORD has not spoken.
Daniel 2:2
Then the king gave orders to call in the magicians, the conjurers, the sorcerers and the Chaldeans to tell the king his dreams. So they came in and stood before the king.
Daniel 2:10
The Chaldeans answered the king and said, “There is not a man on earth who could declare the matter for the king, inasmuch as no great king or ruler has ever asked anything like this of any magician, conjurer or Chaldean.
Zechariah 10:2
For the teraphim speak iniquity, And the diviners see lying visions And tell false dreams; They comfort in vain Therefore the people wander like sheep, They are afflicted, because there is no shepherd.
Malachi 3:5
“Then I will draw near to you for judgment; and I will be a swift witness against the sorcerers and against the adulterers and against those who swear falsely, and against those who oppress the wage earner in his wages, the widow and the orphan, and those who turn aside the alien and do not fear Me,” says the LORD of hosts.
Acts 16:16
It happened that as we were going to the place of prayer, a slave-girl having a spirit of divination met us, who was bringing her masters much profit by fortune-telling.
Share this Post