Today’s message ought to prove to be eye opening and ear opening for sure! I was browsing around, happened upon this video clip, actually it’s audio BUT it was captured and shared via video. You’ll have to go to the website to hear it, in it’s entirety. It was originally narrated in 1965 (before my time) but none the less, when you here what is said,  it’s astonishing…because all of it has come to pass. Don’t believe in the Devil? After listening to this, you should decide differently.

Beyond that, recognizing a problem is half of the solution. Where does one go from there?! Well, there is repentance and deliverance…BUT what if you have done all of that, yet, still find yourself, knee deep in the quandaries of life? We know the walk as a Christian is not entirely smooth, this is to be expected, BUT I am talking about those situations where you feel like a rat on a perpetual wheel. What gives?!
Well, I’ll tell you. It comes in part, through two precious women. One whom I know quite well, we serve in Ministry together and the other, a friend of ours, a mutual acquaintance. I was chatting with my friend over the computer, as we often do from time to time, checking in with each other, for prayer and fellowship. She mentioned something and well, it just resonated with me, as it also did with her, when she had first heard it. This mutual friend, prayed a prayer and the poignant part was this; she asked for God to, “remove & revoke the permission that had been given to the enemy!” POWERFUL! This hit me like a Brick from Heaven! God’s word rung in my ear, “You have not because Yee ask Not!” Jesus died on the cross, bringing us salvation, we have that blessed assurance, yes. BUT I’m reminded of Job, he was a Godly man and loved The Lord with his whole heart. So much so, that when Satan approached the throne, seeking access to his life, he was somehow able to acquire access, and later upon realizing this Job was also able to demand that it be revoked! God knew the end from the beginning, that Job would NOT turn away from GOD but rather draw nearer! God knew that Job would be restored, and restored HE SURE was, more so than before he was reduced. He was an extremely wealthy man to begin with; because of satan he lost nearly everything BUT when he was restored, his new wealth made his old wealth seem like chump change! Now that’s what you call Double for your Trouble, Seven times greater actually one scripture refers to an hundredfold…

King James Version (KJV)
29 And Jesus answered and said, Verily I say unto you, There is no man that hath left house, or brethren, or sisters, or father, or mother, or wife, or children, or lands, for my sake, and the gospel’s,
30 But he shall receive an hundredfold now in this time, houses, and brethren, and sisters, and mothers, and children, and lands, with persecutions; and in the world to come eternal life.

Listen to this: anyone that gives up houses, lands, brothers, sisters, possessions in this lifetime for the sake of the gospel, God will restore back one hundredfold now! (Mark 10:29-30)

So,  I am equipped to mention this, Satan is known to be the accuser, going before the throne, seeking to sift us as wheat…Oh yeas until the judgement day he still has access to the high courts, after he convinces or tricks humans into sin, he then goes before our Father and rats us out, he derives pleasure in mocking God, pointing blame at us and hoping to gain a foothold in our lives through the access we grant him, YES that’s right, its just wrong!

Ephesian 4:27  Neither give place to the devil.

In Job 1:6, Satan stands in the presence of God. (See 2 Chronicles 18:18-21 for a similar situation involving a “lying spirit.”) Read more: http://www.gotquestions.org/Satan-access.html#ixzz2ss025CGE

So now we know! What to do now?! Well, God is so gracious, He has left us so much evidence of battles won and examples set by those great followers who went before us, like Job.
1. Ask forgiveness for sins, receiving that pardon through the work Jesus did for us on the cross
2. Repent, commending your life and actions to following The Lord
3. Renounce any and all interactions or commiserating with the enemy, ask God to revoke the access given! 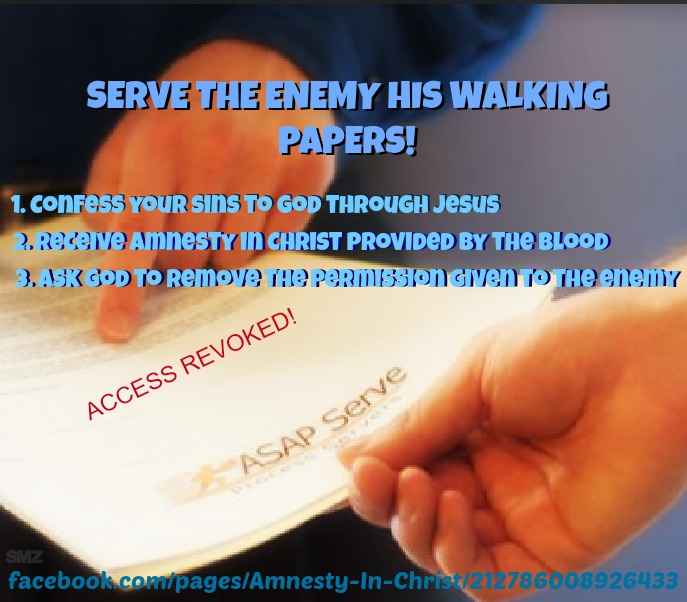 After listening to that audio, I am sure you’ll be able to relate to something described within it, haven’t we all fallen short of His glory. We all need to throw ourselves at the mercy of Gods higher court. God is fully aware of His Holy laws and He instructs us to learn it, to know it and to use it. For it just might be the SAVING GRACE that keeps the enemy off your back while we are here!  We have work to do, and as long as the enemy can keep us tied up in spiritual red tape, we are ineffective to the KINGDOM, time to get the pruning sheers out and snip that parasite off!
Kabamm… goes the gavel! And the enemy is getting served his papers LEFT and right!
What’s in store for you at this point?,…read this:

Now unto him that is able to do exceeding abundantly above all that we ask or think, according to the power that worketh in us,

“So I will restore to you the years that the swarming locust has eaten.” (Joel 2:25)

This is an incredible promise and very encouraging!

Get that permission REVOKED! There is no place in our hearts or lives for this interference.

God Bless you all, and I truly hope you heard and head this warning!

See you next week, God willing!

Luke 22:31
And the Lord said, Simon, Simon, behold, Satan hath desired to have you, that he may sift you as wheat:

Now there was a day when the sons of God came to present themselves before the LORD, and Satan came also among them.

Rev 12:10
And I heard a loud voice saying in heaven, Now is come salvation, and strength, and the kingdom of our God, and the power of his Christ: for the accuser of our brethren is cast down, who accused them before our God day and night.

My little children, these things write I unto you, that ye sin not. And if any man sin, we have an advocate with the Father, Jesus Christ the righteous (1 John 2:1 emphasis added).

For there is one God, and one mediator between God and men, the man Christ Jesus; Who gave himself a ransom for all, to be testified in due time (1 Timothy 2:5-6 emphasis added).

But now hath he obtained a more excellent ministry, by how much also he is the mediator of a better covenant, which was established upon better promises (Hebrews 8:6 emphasis added).


Seeing then that we have a great high priest, that is passed into the heavens, Jesus the Son of God, let us hold fast our profession. For we have not an high priest which cannot be touched with the feeling of our infirmities; but was in all points tempted like as we are, yet without sin…But Christ being come an high priest of good things to come, by a greater and more perfect tabernacle, not made with hands, that is to say, not of this building; Neither by the blood of goats and calves, but by his own blood he entered in once into the holy place, having obtained eternal redemption for us (Hebrews 4:14-15; 9:11-12 emphasis added).