Once again, I have had several instances of a recurring theme show up, getting my attention. In this case it revolves around a shoe. You see, ever since I broke my leg, the time I spent recovering and healing, I found myself truly diving into Gods word for solace and comfort. I also spent a great deal of time painting, (although the paint was digital, just me and my iPad) I was playing around one day and just happened to start a free-form painting, something that looked like a woman’s high heel shoe emerged, so I went with it. It came out fantastic, it pleased me so much, that it became the first in a series of shoes. I thought later on about it that perhaps it was because I was injured and desirous of being able to return to such attire (which seemed really far off, if ever at all).LOL

Rolling ahead, I’ve recovered, but keep painting my fancy shoes amongst other works of art. Incidentally, over over the last few weeks, I’ve been drawn to several passages in the Bible, all of which revolve around a shoe or shoes. I watched the movie, the Story of Ruth from the Bible, (Ruth 4:7) who became the wife of Boaz, (the Great Grandparents of David) I read about Moses being instructed to remove his shoes, as he was standing on Holy ground (Exodus 3:5) and the same thing for Joshua (Joshua 5: 14-15). Further research uncovered yet other mention of shoes, such as (Amos 2:6) which refers to Joseph, who was sold by his brothers into slavery! (which speaks to the injustices of this world, those who sit in high places who have dominion and power, supposing to be in good standing, who are not)

Every account mentioned above, has different meanings, different connotations attached, one meant concession (forfeiting their possession or rights thereto) another meant humbleness, in standing before God and yet another stood for symbolism of an injustice (where money, possession and power were favored over the kinship of blood and brotherhood). So what is the underlying unifying theme to all of this. It is obedience, obtaining it, remaining in it or the lack of it!

I think of a baby, walking around with no shoes, barefoot and it conjures up thoughts of trust, being carefree and cared for. God wants us in spirit to be barefoot to Him, like a baby. We see the loss of a shoe, as symbolic, this applies to anything you might have lost in your life; if it’s yours and meant for you, worn by you, what use is it to anyone else?! In all honesty those that take from others will find that their spoils are as useful as one shoe, in other words useless! That which is taken from us wrongfully, will surely have to be returned or counted to us for restitution. Then we have the conscious and intentional forfeit, isn’t that a picture of dying to this world for the gain of Christ Jesus?! Having the Lord dwell within us, shouldn’t we allow Him to fill our shoes? To order our footsteps and keep us on that path?! 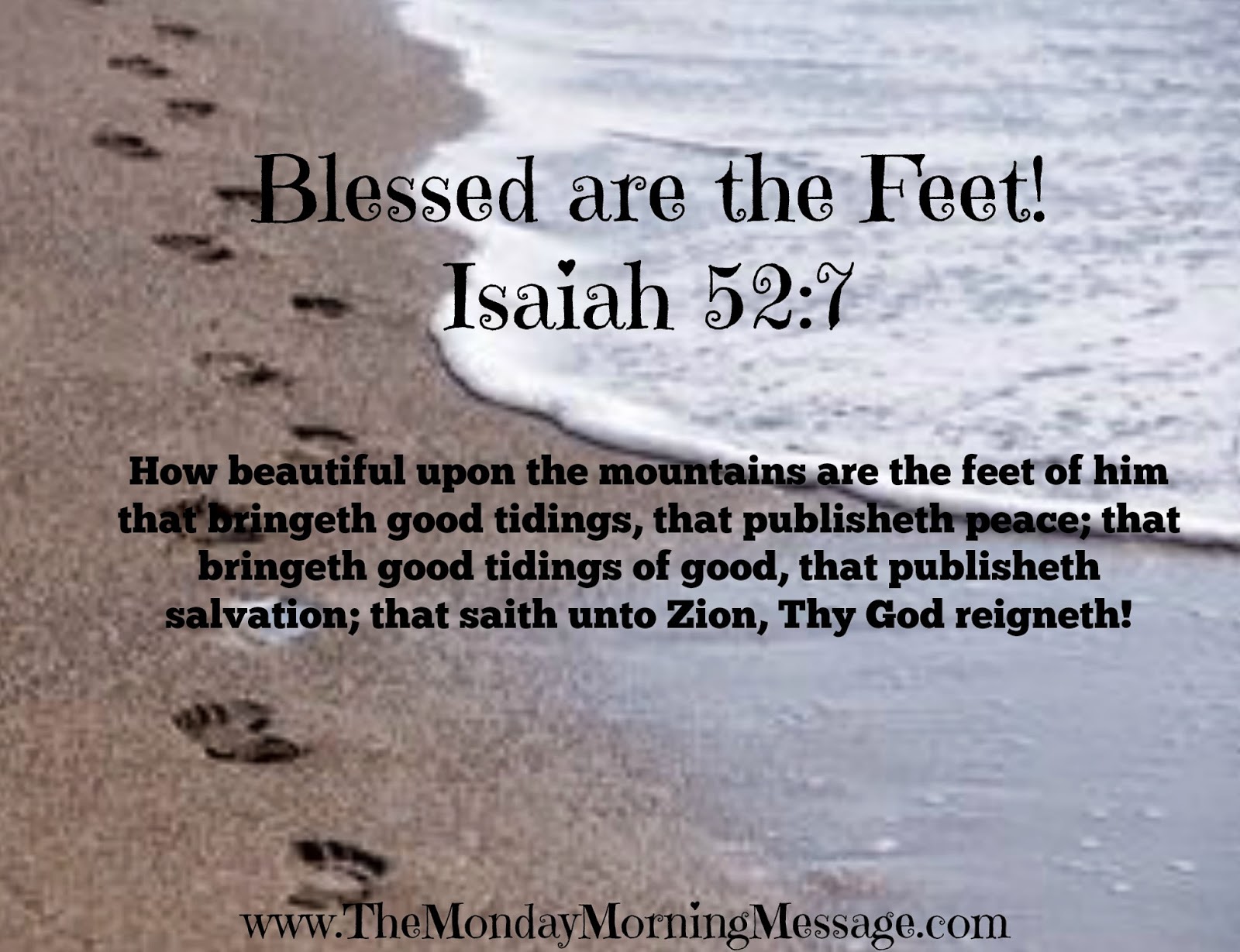 Blessed are the feet of those who spread the Gospel!

Romans 10:15 And how shall they preach, except they be sent? as it is written, How beautiful are the feet of them that preach the gospel of peace, and bring glad tidings of good things!

I hope that gives you some new insights on the significance of walking with the Lord and staying in step with the rhythm of obedience! Have a Blessed week!

Heavenly Father, I plead the blood of the lamb protection over me and mine, over the family, my brothers and sisters in Christ, Lord. let our footsteps always be in proper alignment. Keep us on the path to attaining Your righteousness, go before us in all things preparing the way. Help us to stand strong in Your will and walk swiftly away from anything that is not pleasing to You. Steady us in our endeavors and bless us as we carry out your commands in this life as well as the one promised to us, which is coming soon! In Jesus Yehushua Mighty name, we pray amen!

Amos 2:6 Thus saith the LORD; For three transgressions of Israel, and for four, I will not turn away the punishment thereof; because they sold the righteous for silver, and the poor for a pair of shoes;

Joshua 5: 14-15 He said, “No; rather I indeed come now as captain of the host of the LORD.” And Joshua fell on his face to the earth, and bowed down, and said to him, “What has my lord to say to his servant?” 15The captain of the LORD’S host said to Joshua, “Remove your sandals from your feet, for the place where you are standing is holy.” And Joshua did so.

Exodus 3:5 And he said, Draw not nigh hither: put off thy shoes from off thy feet, for the place whereon thou standest is holy ground.

Ruth4:7 Now this was the manner in former time in Israel concerning redeeming and concerning changing, for to confirm all things; a man plucked off his shoe, and gave it to his neighbour: and this was a testimony in Israel.