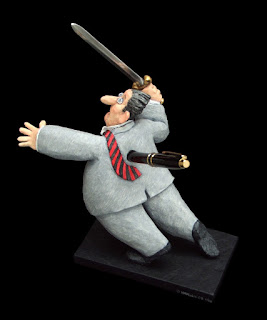 Ever hear of that expression…”the pen is mightier than the sword”!?
The pen represents words, whether they be spoken, written or concealed within the thoughts of the thinker.The ammunition is pride & the aim is shame. Words can discredit & attack another’s reputation or whatever it is they hold dear. Truly that is when words become weaponry, we ought be very careful when sharing information regarding what we know & even more so on what we think we know.
As Christians, we are called to a higher standard, meaning, we are supposed to be more concerned about making sure WE are, ourselves, in right standing. God loves us & died for us while we were yet sinners (Romans 3:23). Man crucified Jesus because they perceived Him as a threat & judged Him wrongfully! God warns of this in many scriptures about the hypocrite, “the speck in the eye and the beam”. He reminds us that all sin is sin, all of it wickedness & all of it TOTALLY INCOMPATIBLE with His Heaven and His Divine Righteousness. After all, that was the problem,  the whole reason Jesus bled & died on the cross. We needed a solution & God found a way. That way was very painful and very serious for God who became man. Ages before God sent His Son, sacrifices where made, deaths of atonement were performed but they would never be enough, never suffice! Our condition became that severe, no ordinary atonement would do!

*Romans 5:7-9
7 Very rarely will anyone die for a righteous person, though for a good person someone might possibly dare to die. 8 But God demonstrates his own love for us in this: While we were still sinners, Christ died for us.
9 Since we have now been justified by his blood, how much more shall we be saved from God’s wrath through him!

Let’s struggle to retain this fact, a Christian has no right to pass judgement on another at all, whatsoever. Neither does a non believer for that matter, but we are specifically focusing on the believer of Jesus, whom He or she themselves have sinned against our Lord. Whether you put off your sin yesterday, last year or still struggle, you are no better or worse than your brother or sister, all are guilty, all fall short  of the Glory of God,  that’s just fact! Sin is sin, BUT He in fact does emphatically state His displeasure of those who step on His toes when it comes to judgement. Few exceptions exist, obviously we are commanded to exhort those who are clearly misrepresenting the Word or those who are blatant in their display of deeds. Essentially though, at that point we are instructed to point them toward the word and to pray for them. JOHN 5:30* An exhortation is strong in encouraging and urging, not in passing judgement, belittling or gossiping.  We are to discern sin but it is supposed to be self directed observation as a means of setting our own life aright, not to point fingers at others. There are some people in this world who have no convictions, no conscience, no guidance and no desire to receive any of it. They are the ones who need a savior, we are the ones instructed to get that memo to them, in the best, most effective, loving, Christian way as possible.
It is a well known & widely accepted mindset of the faith to say, “If You are convicted in your heart over something, it means it’s is wrong for you”. Sometimes,  in a persons life, those convictions reside as the only means of getting that person to correct their life path. They rise to the surface as judgements if only their inward ears would hear what their outward vocalizations are saying!. Those verbal arrows are usually clear indicators of residual guilt & shame. 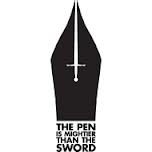 JOHN 5:30 I can of mine own self do nothing: as I hear, I judge: and my judgment is just; because I seek not mine own will, but the will of the Father which hath sent me.

People don’t grow spiritually naturally – they have to be counselled, encouraged, exhorted and urged in their walks…

Proverbs 11:14
14 For lack of guidance a nation falls,    but victory is won through many advisers.Psalm 11 Blessed is the one    who does not walk in step with the wicked
or stand in the way that sinners take    or sit in the company of mockers,2 but whose delight is in the law of the Lord,    and who meditates on his law day and night.

Phillippians 2:12 Wherefore, my beloved, as ye have always obeyed, not as in my presence only, but now much more in my absence, work out your own salvation with fear and trembling. 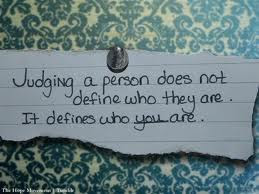