What a truly blessed Resurrection/Passover weekend this was! I was able to attend a massive celebration with my entire church for Good Friday as well as fellowship with my closest and dearest friends. I pray that everyone had an equally moving holiday weekend and that we all return our focus to that very PERFECT work that Jesus performed for us a little over 2,000 years ago!

The burden of sin had a penalty, did it not?! It’s result meant eternal damnation ultimately, and for those unrepentant generations that followed after Adam, it meant toil, hardship and sickness of every degree for human life on earth. The work that Jesus performed that day, for sure shifted the burden that was placed against mankind onto himself, where the debt could once and for ALL be satisfied.

The message today is about the shifting of burden. Namely; forgiving and blessing your enemies! What does that mean?! Many people, of all walks, struggle with this concept and have no idea how trapped and imprisoned they are by their own burdens concerning whatever was wrongfully dealt them, which they insist on carrying around.

The other morning, while I was getting ready for the day, I just happened to catch a segment of something on tv, I couldn’t see it BUT I could hear it, as I was fixing to get ready! It was a morning talk show and they mentioned this unusual occurrence by a well known Radio personality who shall remain nameless. This public personality is infamous for being opinionated, loud, callous and often very crass in their delivery. Most, if not all of the content appeals to those who believe sexism, consumption, ridicule and sarcasm are fair game, if arrows can be shot in the name of humor, this person is a sharp shooter with an endless supply of ammo!”

What caught my attention was what one of the chat show regulars said, they commented on how this well known radio personality was known to have verbally belittled & bullied another well known talkshow host who was on a different network and medium, altogether. For years, the insults, commentary and opinionated belligerence spewed toward this person. What many didn’t realize, is that it was all completely unfounded and unwarranted, as the two had never even met. Apparently, just recently, the two had both been guests at an event. When the one found out that the other was there; what happened next will shock you.  Having suffered for years with this unrelenting ridicule, this other talkshow host saught out the Radio personality, most likely having to go out of their way just to get in their presence and then; once face to face,  warmly greeted this person, with hugs, handshakes and pleasantry! This happenstance didn’t have such an impact that anyone should notice; nothing dramatic or scandalous ensued. Rather, it set in motion, the shifting of burden in the spirit to such a degree that what happened soon thereafter will surely prove this point.  The very Christian attitude exemplified by this person, in that moment, had such a powerful impact on this Radioshow personality, they were compelled to publicly renounce all former opinions, backbiting and hurtful words! It in fact, turned out to be one of the gushiest most sincere things this person has probably ever delivered over the airways!

This, my firiends is just merely an example of what we are taught about Not returning evil for evil, about blessing our enemies and about praying for those who wrongfully persecute us. When you pray for your enemies, you are in effect presenting your evidence to the Authority ABOVE, where an issue is therefore decreed and the other party, if truthfully at fault, now bears the burden to make reparation. When you return love for evil, you tear down the walls constructed by the enemy, freeing yourself and leaving the other party exposed to the Reality of their trangressions. When you Bless those wrongfully persecute you, you put a powerful, principle force into play that has to be fulfilled. Gods word shall not return void! Neither will forgiving your enemies! Had it not been for the forgiveness of enemies, Easter would never have been, nor the birth and death of Our Lord, Nor Eternity in Heaven. We were enemies with God, when He decided to save us by sending His Holy Son to warmly embrace and grace us!

Heaveny Father, I plead the blood of the Lamb over myself and all whom I hold dear. Lord, I stand before you having a heart ready to accept whatever Your will is, I have searched my soul and done the hard work of blessing and praying for any whom have hurt me. I pray that you would always keep my heart in this constant state of forgiveness, I pray that if there are any that I have forgotten that you would bring them to my attention. I wish everyone that I know would honour and love You as I do. I want for everyone that which I also want for myself. May You come quickly for us Lord, as this world is in such deseparate need of You! Jesus, You are the aim and Heaven will be the gain. In Your mighty name we pray AMEN! 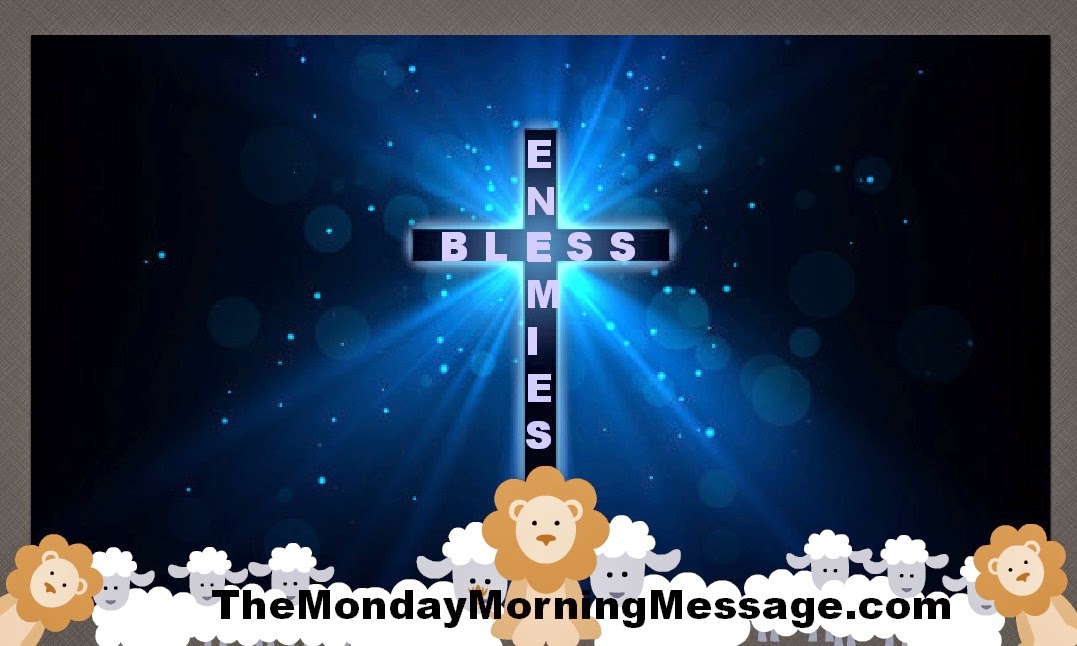 But I say unto you, Love your enemies, bless them that curse you, do good to them that hate you, and pray for them which despitefully use you, and persecute you.

Bless them that curse you, and pray for them which despitefully use you.

Bless those who persecute you; bless and do not curse them.

Do not rejoice when your enemy falls, and let not your heart be glad when he stumbles,

For wicked and deceitful mouths are opened against me, speaking against me with lying tongues. They encircle me with words of hate, and attack me without cause. In return for my love they accuse me, but I give myself to prayer. So they reward me evil for good, and hatred for my love.

Romans 12:20
To the contrary, “if your enemy is hungry, feed him; if he is thirsty, give him something to drink; for by so doing you will heap burning coals on his head.”

Matthew 5:43-48
“You have heard that it was said, ‘You shall love your neighbor and hate your enemy.’ But I say to you, Love your enemies and pray for those who persecute you, so that you may be sons of your Father who is in heaven. For he makes his sun rise on the evil and on the good, and sends rain on the just and on the unjust. For if you love those who love you, what reward do you have? Do not even the tax collectors do the same? And if you greet only your brothers, what more are you doing than others? Do not even the Gentiles do the same?

But if ye forgive not men their trespasses, neither will your Father forgive your trespasses.

Psalm 57:6
They set a net for my steps; my soul was bowed down. They dug a pit in my way, but they have fallen into it themselves. Selah

Deuteronomy 31:6
Be strong and courageous. Do not fear or be in dread of them, for it is the Lord your God who goes with you. He will not leave you or forsake you.”

Luke 23:34
And Jesus said, “Father, forgive them, for they know not what they do.” And they cast lots to divide his garments.

Of David. Contend, O Lord, with those who contend with me; fight against those who fight against me! Take hold of shield and buckler and rise for my help! Draw the spear and javelin against my pursuers! Say to my soul, “I am your salvation!” Let them be put to shame and dishonor who seek after my life! Let them be turned back and disappointed who devise evil against me! Let them be like chaff before the wind, with the angel of the Lord driving them away!

For you will heap burning coals on his head, and the Lord will reward you.
Share this Post