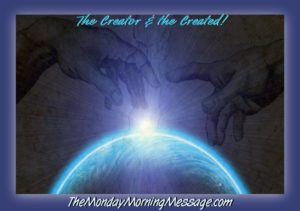 We as humans are and were, created in God’s image. We are His masterpiece.  After creating all things which were good; the universe, stars, planets, plants & animals, He saved the best for last. After all was created, He said that it was very good.

Besides being very special and unique, to all the universe and the heavens. We are able to create  &  pro-create. A special gift and attribute that our Creator shares with us.. Along with these abilities, we have the gifts of creativity, invention, spontaneous cognitive inspiration. Such splendid things we are able to conceive of and accomplish.

He had an intention for His attention toward us. That we would discover more of Him as we discovered more about how well He equipped us.

If one can admire a skyscraper and imagine the ingenuity of the architect how much more so can we attribute to the architect of all, the whole universe. The one who programs a cell and instructs a molecule. Such wondrously intricate and profound systems of organization on the smallest of scale and the grandest.

How can we harness this creativity He has equipped us with, in order to satisfy the expectation and obligation that rests upon us. Seek Him, find Him, emulate Him. and show Him to others. That is our task.

Every time you choose His way over yours, you seek Him. Every time you surrender the knowledge of the world and embrace the Godly, you find Him. Every time you allow God to mold you and work through you, you emulate Him. Every time that you allow the spirit to direct and speak, you show Him to the world. We are instruments, just as a pen is, in the hand of the Author. Without His expert mechanics applied to our lives, we are just a mere ink blob, clumsily appearing for but a time.

1 In the beginning God created the heaven and the earth.