The bible itself gives us enough evidence of the trinity. Never mind that the Bible doesn’t actually say the word. After all, what good is an empty word without its meaning, definition or example?
The bible doesn’t say the word “Rapture” either but we know enough from what we have read, that inevitable event will take place.
We do not hear the word H2o anywhere in the Bible either but I can assure you water is spoken of, used, illustrated and present in almost every book.
God is so ultra specific in His references to Jesus and the Holy Ghost, that scripture alone identifies, describes, illuminates and embodies the principle of Trinity.
We must be very careful when we seek to discredit Gods authority. God takes His heritage & His Holy Kinship with Jesus and the Holy Ghost very seriously! If you try to bring something other than the word of God, you will not be met with favourable results from THIS Disciple of Christ, Child of God and Holy Ghost going girl!  To be exact, the Bible says that I am not even to wish such an one God Speed! False doctrine is about as tolerated as a psychotic intruder!
The Holy Bible was written originally in Greek and Hebrew, so for those of you who may not realize it, in actuality, every word we read does not appear in the Bible, rather what we have is a direct translated version. As close as close can be is the King James Version because it was the first translated version from these original two languages. Jesus himself spoke Aramaic, which by the way is spoken in only one small place in the world.
The only place smaller is the heart and mind of the ignorant, unrepentant heart!

John 1:14 and the WORD became flesh and dwelt among us, an we have seen His glory, glory as of the ONLY Son of God, full of grace and truth!

Don’t choke on it now, just swallow it and except it. If it’s a bitter pill it’s a necessary one, if it did you no good, sorry, there is no other REMEDY!

2 John 1;10If there come any unto you, and bring not this doctrine, receive him not into your house, neither bid him God speed: 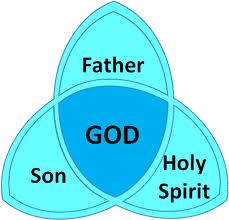 MORE SCRIPTURE ON THE HOLY TRINITY, JESUS EXISTED AND CREATED EARTH AND ALL THINGS…GOD REFERS TO JESUS AS GOD

Hebrews 1:8 (KJV) But unto the Son he saith, Thy throne, O God, is for ever and ever: a sceptre of righteousness is the sceptre of thy kingdom.
Hebrews 1:9 (KJV) Thou hast loved righteousness, and hated iniquity; therefore God, even thy God, hath anointed thee with the oil of gladness above thy fellows.

Hebrews 1:2 (KJV) Hath in these last days spoken unto us by his Son, whom he hath appointed heir of all things, by whom also he made the worlds;

Hebrews 1:3 (KJV) Who being the brightness of his glory, and the express image of his person, and upholding all things by the word of his power, when he had by himself purged our sins, sat down on the right hand of the Majesty on high;

Colossians 1:16 (KJV) For by him were all things created, that are in heaven, and that are in earth, visible and invisible, whether they be thrones, or dominions, or principalities, or powers: all things were created by him, and for him: